One of the reasons for starting this blog was to share my photos of fabulous street art with you. By now my computer is filled with hundreds, if not thousands, of such photos. I have them organised in various folders: by artist, by location, by date and by event or trip abroad. Going through my archive recently inspired me to start a new blog post series: Same Wall, Different Street Artist. As the name suggests, this series will show you how exactly the same wall is transformed by different artists over time.

Let’s kick off this series with murals on Thai restaurant Kinkao on Pedley Street in Shoreditch, one of the spots I always visit on my street art wanderings around Brick Lane. I wrote down the dates I took the photos on and they go back as far as November 2013.

I remember various murals by Brazilian artist Cranio on exactly this same wall, but can’t seem to find these other photos (despite my meticulous archiving system!). The blue natives from the Amazonian jungle are typical of Cranio’s works. As always they are influenced by western capitalism (note the sneakers, McDonald’s sweatband, bag of money and smartphone).

Just a few days after taking the previous photo, the wall had been completely transformed by New York-based artist Beau Stanton. I don’t recall seeing any other works in London by this artist, which is a shame as this mural was a real beauty. 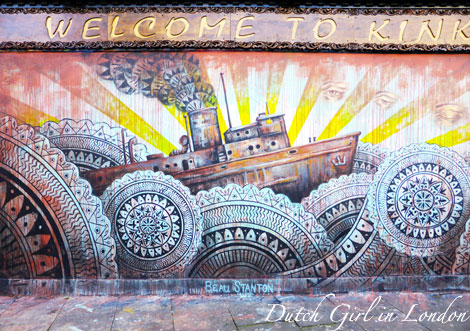 Half a year after Beau Stanton’s mural, it was replaced by Fanakapan‘s exquisite 3D balloon animals. It was one of the first works I saw by him, but now they are popping up everywhere and seem to get better and more extraordinary each time.

In May 2014 Italian-based (born in Venezuela) artist Gômez caused a stir in the London street art scene. His excellent works, inspired by classical paintings, didn’t only appear on London walls, but also on social media where they were liked and shared like mad.

After the rather dark mural by Gomez, the wall was brightened up with this colourful work by Bicicleta Sem Freio (Bicycle without Brakes) an illustrator duo from Brazil. Here’s my attempt of taking a panorama photo.

The wild and bright mural by BSF was replaced by this serene piece by artists Hannah Adamszek and Guido Zimmerman. I had seen many of Hannah Adamszek’s works before (mostly her signature portraits of a native American bohemian looking woman), but this was the first time I encountered Guido Zimmerman’s work. Within a few days after completing this mural, someone thought it was necessary to write their comment right across it saying beautiful art belongs in galleries and not in the street. I beg to disagree, but what do you think?

After the above mural was defaced by a protestor against pretty street art, Italian-born and self-taught artist Mr.Degrì painted over it entirely. You can still see a bit of the previous art peeking out on the right in the photo below. Mr.Degrì’s work shows two skulls and a pigeon walking over some kind of bridge between the two objects. Quite a different theme compared to the previous serene depiction! But this is what makes street art so wonderful to me: you have a constant flow of new and diverse artworks all for free and convenient to admire. I haven’t seen that much art by Mr.Degrì in the streets, but I’m sure he left his mark around London. I’ve spotted his smaller pigeon work on Cambridge Heath Road for months on my way to the gym and he also made a huge black and white portrait of David Lynch on Grimsby Street just off Brick Lane. 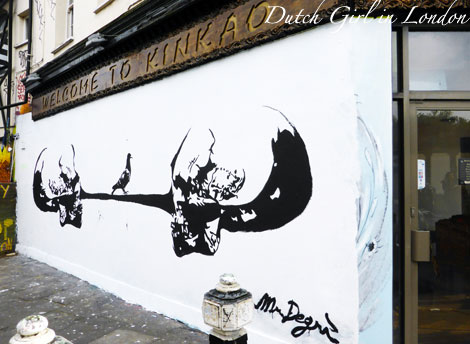 It’s sure great to see that each artist has an own voice and style. This is especially true for the works below. The work on the left called ‘You Are Much Better Than You’ is by RallitoX, an artist whose works go far beyond street art. Have a look at his website and view some of his videos to get an idea of his conceptual art.

On the right you can see work by Italian artist Mauro149 of the Truly Design crew.

Detail of the RallitoX piece. Try to find his self-portrait in it and also his depiction of IKEA, Angela Merkel David Cameron. I especially like the line ‘Sorry for not painting nicer and with more colors but I had a troublesome childhood.’

Detail of Rallitox’s part of the wall 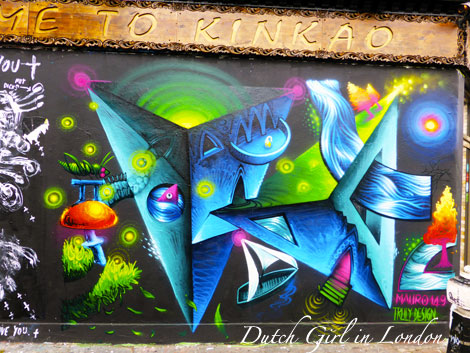 Detail of Mauro 149’s part of the wall

Right after I first saw the great work by Ana Marietta in the ‘Summer Time!’ exhibition at JUSTKIDS gallery (see my post about this here), she took over this wall in Shoreditch. It’s one of my personal favourites in this series and it’s too bad it disappeared again very quickly, but guess that’s all part of the ever changing street art game.

How fitting to end this first series with the current mural made by artistic duo Telmo Miel from the Netherlands. I had only seen one of their works in real life before (a few years ago near EYE film museum in Amsterdam) and have followed them online ever since. Despite my virtual stalking I completely missed the fact that they were in London last month and the chance of meeting them. At least we’ll always have the photos…

Stay tuned for additions to this street art photo series!

If you have such photo series, I would love you to post them online and share them with me! I started the hashtag #samewalldifferentartists on Instagram and Twitter last year so I suggest you to use the same one and who knows it will be a trending topic one day! 😀

I’ve always admired the works of @stikstudio and how his seemingly simple stick figures lacking noses and mouths manage to convey deep emotional feelings. • Usually they’re rather docile figures, portraying more gentle emotions, but at this moment in my life his ‘Screamers’ that have adorned this East London house for years now, seem very fitting. • I wish I could scream out from the top of my lungs but instead I constantly choke on my tears and endless memories 😔 • • • #streetart #mural #muralart #grief #eastlondon #stik #stikart #shoreditch #londonstreetart #deepemotions #streetartphoto #streetartphotography #streetartblogger #londonblogger #dutchblogger #travelblogger #reisblogger #discoverunder2k #under2k #contentcreator #dutchgirlinlondon
💔How do you come to terms with the death of one of your closest and longest friends? Especially when it was their own choice? That’s what I’ve been asking myself for the last two weeks. • Some people never get to find their soulmate, I was such a lucky bastard to have found two. And even luckier that they became good friends too. But eventually my luck ran out and now I must find a way to continue my life while a big part of it is missing. • 21 years we shared love, laughs and loss together, first as partners and later as best friends. But never did you share your struggles with the demons who were haunting you with me. • This photo of my 20-year old self was sent to me by a friend last week when we were collecting photos and memories for the service and our final goodbye. And this is all what we have left of you, memories. It hurts me to the core and at the moment the pain is unbearable. • I will always cherish our unique bond and special friendship which I also got to share with hubby. Without him I’d be at a loss right now. Whilst grieving together, we’ll always keep you safe in our hearts. • • • #friendship #grief #suicide #depression #mourning #honesty #thisislife #dutchgirlinlondon #tb #memory #broken
💵The best things in life are for free 💛 Did you know you can enjoy fantastic panoramic views of London from 160 metres above ground for free? • That’s possible at Sky Garden right in the heart of the City of London. The top floors of this 38-storey ‘Walkie Talkie’ building houses a garden, several bars and restaurants and an observation deck. • If been there twice now and I highly recommend a visit. (As you can see from the photo of my in my big warm boots one of those visits was during a much colder winter.) • You can find all the information and more photos in today’s blog post. Link in bio! 🙌🏼 • • • #london #londonblogger #visitlondon #londonviewpoints #skygarden #dineinthesky #dutchgirlinlondon #dutchblogger #londontip #contentcreator #discoverunder2k #under2k
Love this epic mural by @conorsaysboom down in Dulwich, south London. This area of London wasn’t really on my radar to visit until I heard about the local street art project initiated by Ingrid Beazley who worked at the Dulwich Picture Gallery. She invited artists to make an outdoor artwork based on a classical painting in the gallery (which in itself is worth a visit too). More about this area and other great street art locations in London on my website in last week’s blog post. • • • #streetart #dulwich #mural #muralart #urbanart #conorharrington #muralist #londonstreetart #streetartlondon #london #londonblogger #streetartblogger #dutchblogger #travelblogger #reisblogger #thisislondon #londonerscity
🍻C H E E R S 🍺 In the last photo I wrote about the former Truman Brewery on Brick Lane, East London. Today it houses a plethora of independent shops, restaurants and galleries but up until its closure in the 1989 it was an active beer brewery. Established in 1666, Truman Brewery is a true Shoreditch icon. At a certain point it was even the largest brewery in the world! • When a few friends started their micro brewery a few years ago, they discovered the name Truman was for sale. They even adopted the old logo and re-established the brewery further east in Hackney. @trumansbeer is open for brewery tours (and leisurely lounging as you can see in the pic 😎) • More about the historical sights in Shoreditch in this Sunday’s blog post. I know I mentioned it before, but I’m excited about this one ;-) • • • #beerbrewery #brewery #eastlondon #shoreditchhistory #trumanbrewery #shoreditch #spitalfields #hackney #eastlondon #london #thisislondon #uniquelondon #dutchgirlinlondon #londonblogger #dutchblogger #travelblogger #reisblogger #discoverunder2k #under2k #londonhistory #theeyrie
I’m doing a little experiment on my blog this year and will write predominantly London-related articles. My business as a London city guide has really picked up in recent months and I realise I so enjoy sharing stories about this city’s long and rich history. • I’ve been going through my extensive photo archive this week digging out images for my new blog post on Sunday about unique things to see in Shoreditch. • I’ll give you a sneak peek here: it includes the bronze plaques hidden in the ground across the area that were made by the artist Keith Bowler. There seems to be little information on him, but he was commissioned to make 22 of the so-called ‘Spitalfields roundels’ all depicting something that’s characteristic of the site where it’s placed. Like these beer jugs that lie within the cobblestones of Brick Lane. Here used to be the HQ of Truman Brewery, now known as the heart of Brick Lane with its independent shops and restaurants but up until the 1980s it had been a famous beer brewery (established in 1666!). Many feet pass this site today but not many actually know the story of what lies beneath them. • More of such sights and stories to follow in this Sunday’s blog post! • • • #shoreditch #spitalfields #spitalfieldsroundels #secretlondon #london #eastlondon #londonblogger #londonlife #dutchblogger #travelblogger #reisblogger #unusuallondon #londonhistory #bricklane #plaque #bronzeplaque #trumanbrewery #dutchgirlinlondon
%d bloggers like this: