This week WordPress kindly reminded me of the fact that my website is 5 years old this month! Looking back at the articles I wrote during my first month of blogging I found the one about my Rocktober in 2013 when I went to see the opera The Wasp Factory (with music by electronic musician Ben Frost), the musical Jesus Christ Superstar and several rock concerts, including Nick Cave!

In celebration of rocktober and my blog’s 5-year anniversary, I will share some of my funniest and most memorable anecdotes of rock concerts and festivals with you. It was quite difficult to select the best three memories as I thought lots of anecdotes were quite hilarious at first, but then realised most were more like a ‘you had to be there to fully appreciate the humour in that situation’ kind of funny.

So without further ado, here are my three most memorable rock and roll moments! Hope they’ll keep you entertained and make you smile 🙂

The first ever large-scale festival I went to, was the 3-day metal festival Dynamo Open Air in Eindhoven, the Netherlands. It was the year 1998 and I was a fresh-faced 19-year old. My parents were a bit nervous for sending me off to this event as whenever they showed clips of the festival on television it would typically be rather prejudiced and negative news coverage. News programmes always enjoyed to show crowds of long-haired apparent up-to-no-good lads completely dressed in black, banging their heads to loud and ‘unlistenable’ music. It was also common to mention the long traffic jams on the roads up to Dynamo. All in all, the message was:

Hell has arrived in Eindhoven and don’t even think of going near there.

So, there I was at my first proper music festival, surrounded by thousands of ‘thugs’. The truth couldn’t be further from what the news tried to make us believe though. I found that these metalheads were actually some of the most fun and polite festival-goers. I went to more mainstream festivals like the famous Pinkpop later in life as well and was often astounded by the levels of rudeness amongst the more ‘normal’ youngsters. 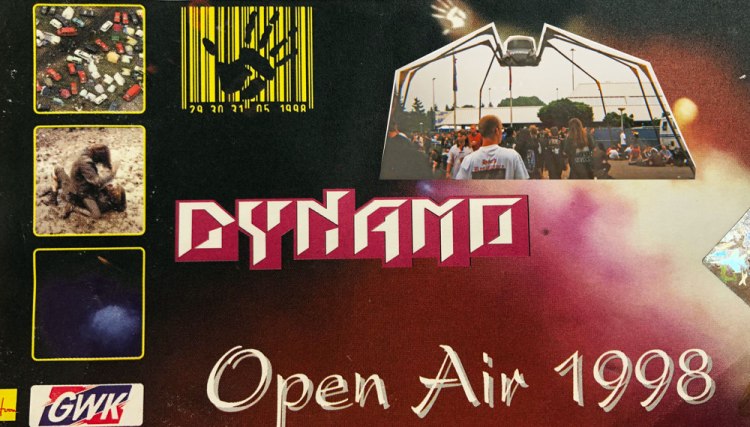 My ticket for the first rock festival I ever went to: Dynamo Open Air 1998. I collaged a photo of mine in it of the ‘spider car’ which was the iconic entrance to the festival

On the third and final night of Dynamo I, still alive and healthy, found myself at the lively set of Pantera. Crowdsurfing was still allowed back then and being carried away (literally) by the moment, I decided to give it a go. Perhaps not the wisest thing to do during one of the most aggressive performances of the festival, but hey I was still young and pretty bouncy. All was good until I realised there was a large gap between my last ‘catcher’ and the next group of people. Instead of dropping me on the floor, my ‘catcher’ was a real gentleman and decided to carry me for a few metres to hand me over safely to the next people.

When all goes smoothly, crowdsurfing can be an exhilarating experience. Unfortunately, you never know when and where you’re dropped back on your feet again/ (Photo: 9parusnikov/Bigstock)

Before I knew it, I had landed right in the mosh pit. Arms were flying in the air, drops of sweat and beer were flying ’round together with plenty of testosteron, heads were banging and hands were pushing. Perhaps not the best time to realise that my shoe laces were untied… When I ducked down to tie up my laces, I noticed a few people had formed a protective wall around me ensuring no-one would accidentally knock or kick me down. How about manners and social awareness eh!? And they didn’t do that just because I was some young chick as I saw people did the same for whomever who needed ‘protection’ for a moment. I’m not sure if I’d want to end up in a mosh pit today, but I have to say that I did feel very safe at that moment and during the festival that was surrounded by so much negativity and prejudice in mainstream media.

During the last weekend of June 2007 my friends and I went to the excellent 4-day festival Rock Werchter in Belgium. The jam-packed line-up featured artists such as Amy Winehouse, LCD Soundsystem, Beastie Boys, Metallica, The Chemical Brothers, Joan as Police Woman, Kings of Leon and many more.

On the second night Pearl Jam closed off the day on the Main Stage and I think it was the first time I ever saw them play live. This was a pretty big thing for me as their classic album Ten was one of the most decisive albums during my childhood. Yes, I very much associate the nineties with grunge, and yes, I did wear a lumberjack shirt tied around my waist, boots and torn jeans back then – but at the time the holes in the jeans were a result of old-fashioned wear and tear. We couldn’t (nor wouldn’t we have done) buy pre-damaged jeans in the shops.

Back to the story: It was a pretty exciting evening as Eddie Vedder made a special guest appearance during Queen of the Stone Age’s set earlier that night and in return, Josh Homme played along Pearl Jam for a bit. I was annoyed when I had to urgently go to the toilet during Pearl Jam, but couldn’t hold it up any longer, so reluctantly made my way to the portable Dixi toilets on the festival grounds. As most sensible people, I find those toilets absolutely disgusting and think the best approach is to close your eyes and nose while doing your business in there. To my surprise, shock and absolute horror, I heard some excited squeals coming from the toilet next to me, but soon realised that Pearl Jam didn’t have anything to do with this ‘excitement’. No, the occupants of the chemical toilet next to me were having sex in pretty much the most unsexiest location I can think of. Let’s just hope they washed their hands (and disinfected their entire bodies) afterwards!

Going to the toilet at a festival is one of the least pleasant things in life… (photo left: AnitaVDB/Bigstock // Photo right: Samphire/Bigstock)

I was in doubt about which anecdote to share here as my final one: was it going to be about my first rock concert when I ended up stagediving all night and got my hair stuck in a guitar whilst headbanging on stage or about the maddest concert I’ve ever been to? I chose for the latter…

In December of 1999 I went to see the American alternative metal band Slipknot – famous for their personas with every band member wearing matching jumpsuits and a different creepy mask – in Melkweg, Amsterdam. It was only the second night of their first ever international tour, which would explain the full-on energy on stage, and off it…

Slipknot performing at the Soundwave Festival in Brisbane in 2015. By then their outfits looked a bit more sophisticated than when I saw them live. (Photo: Heavy Metal Bands info/Bigstock)

Arriving at the sold out venue a bit late, my friends and I decided to grab a spot on the balcony from where we had a good view of the stage and the crowd. And all the things I witnessed that night were just insane! One of the percussionists, a pretty big guy wearing a clown mask, was throwing water bottles at the sound guy who didn’t hesitate to hurl them right back to stage each time, while some other band members were caught in some argument with members of the audience. Being on the balcony, we were enjoying the adrenalin-pumping music and wild energy in the room. Just across from us on the balcony, we spotted a film crew from Omroep Brabant, a local TV channel from the southern province in the Netherlands where my friends and I lived. We were surprised to see the pretty blonde presentator at such an event as she didn’t strike us at all as someone who would be into such music (but then again, people also always presumed the same about me). It turned out that we weren’t that safe at all up there on the balcony and that the TV crew were actually in a prime spot to document what was to follow.

One of the band members ran up the staircase to the balcony where he ran right behind us (phew!) and towards the ledge of the balcony where he was preparing to jump back down a few metres into the audience. When I looked down, I saw a group of people gathering at the anticipated landing spot, and getting ready to catch the guy. One of the assembled audience members ‘discreetly’ went to the side to quickly throw up (not sure if it was the excitement or alcohol that upset his stomach), wiped the vomit off and made it back to the small gathering of catching volunteers just in time to catch the band member and get him safely back on his feet again.

I saw Slipknot two more times in later years, first in a bigger venue and finally at a big music festival, but the bigger the events got, the less I felt that ecstatic energy as during that first gig. I had never seen such a wild performance before and nothing like it afterwards either and it definitely was one of the most memorable rock concerts in my life. 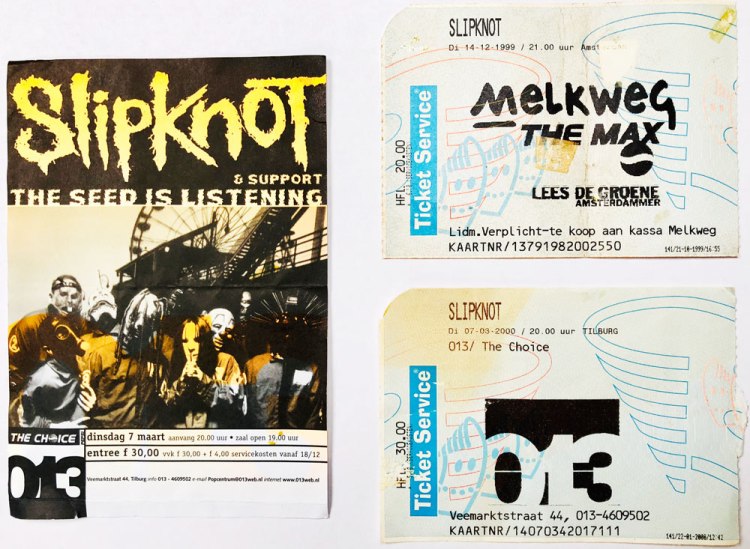 I hope you enjoyed today’s blog post! If you have a funny or memorable anecdote about a rock concert or festival you went to, I’d love to read about it!
Thanks and enjoy the rest of your Rocktober, Zarina xx

9 thoughts on “Rocktober Special: My Most Memorable Rock and Roll Moments”