On the last Sunday of the month, I always write a little recap of that month for my series Reflections. In today’s review: our new pets, meeting my tallest fan and the winner of my recent blog giveaway!

Hubby and I are proud to announce that we have adopted a few unusual pets. Yup, those are worms you see in the photo! We received a special delivery of about 50 wriggly worms recently and made a nice cosy home for them. I have to say they aren’t as cuddly as I imagined… Okay, I’ll be serious for a moment. Hubby actually received the worms for a special project related to soil and the crucial part worms play in the fertility of soil. He’s working on this project with visual artist Kasia Molga.

On the left the special breathable bag the worms were delivered in. And in the photo on the right you can see hubby putting the microphone in the soil.

I’m not entirely sure when and in what form the final installation will be presented, but hubby has a few hours’ worth of sound recordings of worms for it. I’ve heard some clips of it and it’s rather creepy and far more unsettling than you would imagine!

My personal highlight of the month

Was definitely the moment when I was immediately recognised as Lady Modular by book editor Eva Prinz and her partner Thurston Moore (guitarist of Sonic Youth) upon entering a room! It was quite bizarre as Eva had seen my music videos on Instagram for the first time just a few days before and really loved what I did. And there I was suddenly, and she managed to recognise me within a second!

The context: hubby was invited to be part of the 8-day long celebrations of what would have been the 90th birthday of the late French music composer Luc Ferrari. Every day there were live performances at music venue Cafe Oto in Dalston, east London, preceded by film screenings at Close-Up just off Brick Lane. Besides my little moment of fame, it was such a great evening where I met so many lovely people including Luc Ferrari’s widow Brunhild who attended all the events and was the driving force behind it all.

If you want to know more about Luc Ferrari, you can read hubby’s blog post on his website here. And I’d also like to recommend the brand-new book Complete Works of Luc Ferrari, which is the first monograph on Ferrari in English. It’s written by Brunhild Ferrari and edited by Eva Prinz and Catherine Marcangeli (the latter also did the translation).

And the winner is…

Do you remember the special giveaway I announced on my blog a few weeks ago to celebrate 5 years of Dutch Girl in London? I’m happy to announce we have a winner! Natasha Barnes received these typical Dutch treats for leaving me the following suggestion.

I’d love to see more book recommendations! Love all the arts and culture stuff but particularly interested to see what you and others are reading.

Considering I know a lot of people who read a lot, I think this could make for a great blog series asking my friends ‘whatcha reading?’. Thanks again Natasha!

In February I wrote the following blog posts

Films and series to watch

After last month’s massive film & TV list, the one for February looks a bit sad. February has been a disappointing month regarding new cinema releases. I suspect the school holidays and upcoming Oscar awards have to do with this.

Instead of going to the cinema, hubby and I have been mainly binge-watching The Office US on Amazon Prime. So, what’s been on my watch list for February?

Entrance to Kazimierz, the Jewish district of Krakow, c.1935-38 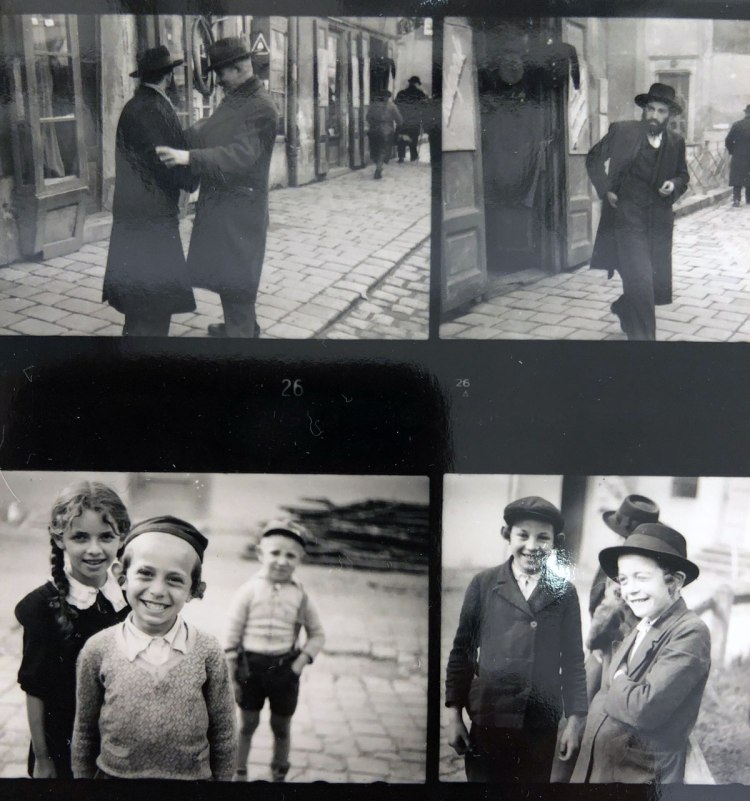 Just came across this photo of @akajimmyc’s mural of David Bowie’s alter ego Ziggy Stardust in Brixton, London. I took the photo in April 2016, 3 months after he had passed away. As you can see, people had left flowers and photos and left messages around the portrait. I haven’t been back to the area since then, but expect it’s still there and still serves as a special tribute to this extraordinary artist. Jimmy C’s works are always quite extraordinary as they exist of countless paint dots. I love his characteristic style! • • • #jimmyc #davidbowie #ziggystardust #streetart #mural #muralart #brixton #london #davidbowieportrait #brixtonstreetart #bowietribute #davidbowietribute #streetartphotography #streetartblogger #artblogger #dutchblogger #travelblogger #londonblogger #londen #artiseverywhere #portrait #publicart #thisislondon #portrait #reisblogger #reismeisje #dutchgirlinlondon #bestoftheday #instacool

Tell me, what have you been up this month?
I always enjoy reading your comments so please leave me a message below!
Thank you, Zarina xx

2 thoughts on “Reflections #6: Our New Worm Pets and Meeting My Tallest Fan”

💵The best things in life are for free 💛 Did you know you can enjoy fantastic panoramic views of London from 160 metres above ground for free? • That’s possible at Sky Garden right in the heart of the City of London. The top floors of this 38-storey ‘Walkie Talkie’ building houses a garden, several bars and restaurants and an observation deck. • If been there twice now and I highly recommend a visit. (As you can see from the photo of my in my big warm boots one of those visits was during a much colder winter.) • You can find all the information and more photos in today’s blog post. Link in bio! 🙌🏼 • • • #london #londonblogger #visitlondon #londonviewpoints #skygarden #dineinthesky #dutchgirlinlondon #dutchblogger #londontip #contentcreator #discoverunder2k #under2k
Love this epic mural by @conorsaysboom down in Dulwich, south London. This area of London wasn’t really on my radar to visit until I heard about the local street art project initiated by Ingrid Beazley who worked at the Dulwich Picture Gallery. She invited artists to make an outdoor artwork based on a classical painting in the gallery (which in itself is worth a visit too). More about this area and other great street art locations in London on my website in last week’s blog post. • • • #streetart #dulwich #mural #muralart #urbanart #conorharrington #muralist #londonstreetart #streetartlondon #london #londonblogger #streetartblogger #dutchblogger #travelblogger #reisblogger #thisislondon #londonerscity
🍻C H E E R S 🍺 In the last photo I wrote about the former Truman Brewery on Brick Lane, East London. Today it houses a plethora of independent shops, restaurants and galleries but up until its closure in the 1989 it was an active beer brewery. Established in 1666, Truman Brewery is a true Shoreditch icon. At a certain point it was even the largest brewery in the world! • When a few friends started their micro brewery a few years ago, they discovered the name Truman was for sale. They even adopted the old logo and re-established the brewery further east in Hackney. @trumansbeer is open for brewery tours (and leisurely lounging as you can see in the pic 😎) • More about the historical sights in Shoreditch in this Sunday’s blog post. I know I mentioned it before, but I’m excited about this one ;-) • • • #beerbrewery #brewery #eastlondon #shoreditchhistory #trumanbrewery #shoreditch #spitalfields #hackney #eastlondon #london #thisislondon #uniquelondon #dutchgirlinlondon #londonblogger #dutchblogger #travelblogger #reisblogger #discoverunder2k #under2k #londonhistory #theeyrie
I’m doing a little experiment on my blog this year and will write predominantly London-related articles. My business as a London city guide has really picked up in recent months and I realise I so enjoy sharing stories about this city’s long and rich history. • I’ve been going through my extensive photo archive this week digging out images for my new blog post on Sunday about unique things to see in Shoreditch. • I’ll give you a sneak peek here: it includes the bronze plaques hidden in the ground across the area that were made by the artist Keith Bowler. There seems to be little information on him, but he was commissioned to make 22 of the so-called ‘Spitalfields roundels’ all depicting something that’s characteristic of the site where it’s placed. Like these beer jugs that lie within the cobblestones of Brick Lane. Here used to be the HQ of Truman Brewery, now known as the heart of Brick Lane with its independent shops and restaurants but up until the 1980s it had been a famous beer brewery (established in 1666!). Many feet pass this site today but not many actually know the story of what lies beneath them. • More of such sights and stories to follow in this Sunday’s blog post! • • • #shoreditch #spitalfields #spitalfieldsroundels #secretlondon #london #eastlondon #londonblogger #londonlife #dutchblogger #travelblogger #reisblogger #unusuallondon #londonhistory #bricklane #plaque #bronzeplaque #trumanbrewery #dutchgirlinlondon
Happy New Year to you all! To celebrate the beginnings of this brand-new decade, I wrote an extensive guide to the best street art locations in London with some great insider tips and hidden gems. • Deciding on the locations was peanuts, but sorting out what photos to use from my archive with thousands of streetart photos took me several days! • I hope you’ll use the guide for your urban explorations of London. Let me know if you do! You can find the link in my bio 🤗 • • • #streetart #mural #muralart #urbanart #londonstreetart #londonguide #shoreditch #hackney #eastlondon #streetartphoto #streetartblogger #londonblogger #ukblogger #dutchblogger #travelblogger #reisblogger #dutchgirlinlondon #stik #londonerscity #thisislondon #londonguide #unusuallondon
As 2019 is coming to and end, the first memories that come to mind of these last 12 months is the fantastic trip hubby and I made to Australia, New Zealand and Singapore where we caught up with lots of old friends but also made some fine new friends. • But the best thing about the trip was to spend 4 weeks with my bestest friend while we explored caves, found golden sand beaches, fed alpacas and kangaroos and, most of all, laughed a lot, like when we tried to take this selfie. • Swipe to the left for some exclusive behind the scenes pics of our selfie-taking efforts 🤣 Wishing you all a happy & healthy 2020 ❤️❤️ • • • #couple #newzealand #roadtrip #coupleswhotravel #coupleswhotraveltogether #2019travel #goodbye2019 #travelblogger #dutchblogger #ukblogger #dutchgirlinlondon #travelpic #selfie #howtotakeaselfie #under2k #discoverunder2k
%d bloggers like this: