Once a month I always look back on what I’ve been up to in the past weeks. What were my personal highlights? What films and series did I watch? What exhibitions did I visit and which countries did I travel to? Find the answers in my Reflections on September.

As you’re reading this, I might be stuck in a Maze

For my 40th birthday earlier this year, my bestie came up with a very unique present: a ticket for a maze. Not any maze, but a surrealistic 400m2 art-themed one. This so-called ‘art meta maze’, named Doloris, is one of the latest attractions my previous hometown Tilburg has to offer. And now almost half a year later, the day of Doloris for me has now (unfortunately) finally come. 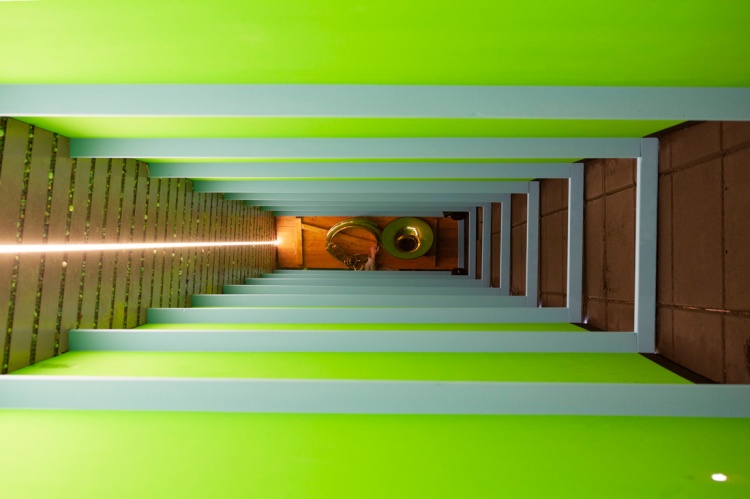 I’m not sure what to expect as reviews of this immersive art experience are rare because Doloris only opened a few months ago. But judging from the information online – not suitable if you’re claustrophobic, don’t wear your best clothing because you’ll be climbing and crawling – it won’t be just a matter of marvelling at artworks.

Considering I have a terrible sense of direction and participants will need to enter on their own, I feel I might be stuck in there for hours instead of the 30-60 minutes they indicate. So, if you don’t hear from me again after this message, please do send help!

Of course I’ll be writing about Doloris on my blog (once I get out of there), but for the moment you can watch this video about it here:

In case you missed it earlier this month, I went to my first ever content creator networking event. During this 2-day event called BorderLess Live I attended lots of interesting presentations and met dozens of inspiring people. Sounds great in principle, but I had several sleepless nights from nerves beforehand.

In hindsight this was totally ungrounded for, but the thought of going to an event to basically sell myself (which I find so difficult to do) and talk to total strangers, scared the sh*t of me. But I’m so glad I took the step and went outside of my comfort zone as it gave me such a confidence boost.

Want to read my full report on my experiences and how I learned how to write good valuable content for my readers (including you!), then head over here: “Always Have Sex for Love, Always Write for Love” – Finding Your Unique Voice

Besides expanding my blogger network, learning new skills and making new friends, I even ended up being quoted in Vice, a leading UK lifestyle magazine. If the mini interview hadn’t come as such as surprise, I would’ve given more intelligent answers.

Click here for the full article: People Are Poking Holes in Influencer Tactics – What Comes Next?

Hubby and I arrived in the Netherlands this week and made two cultural day trips already. On the first day we went to Museum Voorlinden in Wassenaar (near The Hague) and on day two we went to Amsterdam to check out Moco. Read on to find out which day was filled with joy and which one just made me feel ‘dirty’ afterwards…

This engaging contemporary art museum located on a stunning estate had been on my wish list for years. However, since it takes 3 hours to travel there on public transport from my parents, I never went before. I do love art, but I also love avoiding long travels on various trains and busses whenever I can. 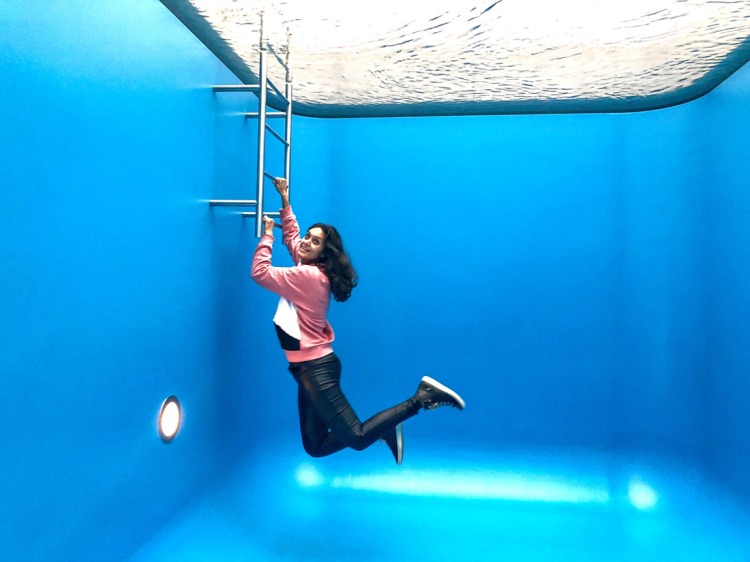 This week I finally my way to Wassenaar because I was very eager to see the unique exhibition on Korean artist Do Ho Suh. Today is actually the last day of his exhibition and if you’re in the Netherlands today and wondering what to do, then I’d suggest to go see the show if you have the chance.

Triggered by his personal experiences after he moved from Korea to America, Do Ho Suh’s works explore the meaning of ‘home’ and ‘identity’. He makes drawings, playful and clever installations, but it’s mostly the colourful textile replicas of his old homes that impress most.

Here’s a small selection of the photos we took at Museum Voorlinden. The second photo is of a work by Do Ho Suh and all the other artworks are part of the museum’s permanent collection. I’ll be posting more photos of the museum on my Instagram, so make sure to give me a follow there if you’re interested to see more!

Ron Mueck ‘Couple under an Umbrella’ 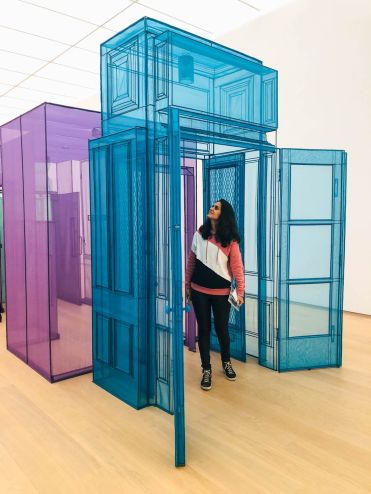 I hadn’t heard about this museum until early this year when I saw photos of the current Daniel Ashram exhibition online. It seemed like a really cool show, so hubby and I decided to go have a look during this trip.

I might write a blog post about Moco at a later point, but the only thing I need to tell you about it now is: do NOT go there! I felt cheated, slightly dirty and taken advantage of afterwards.

The Daniel Ashram artworks were indeed fascinating and beautiful, but they were displayed very poorly, spread across different rooms and floors. Because of this, I found it really hard to connect to them and all sense of a dialogue was entirely lost. This wasn’t helped by the fact that the other rooms were filled by populist artworks by urban artists.

Now, I’d be the one of the first persons to cheer on putting urban artworks in a gallery, but only if it’s done in a meaningful and sincere manner. And that’s what’s so wrong with Moco. They have various dubious artworks on display that are probably not even authentic. This would include some of the Keith Haring drawings and Jean-Michel Basquiat prints that were signed after his death! But what got me most was the unauthorised Banksy exhibition which is exactly the one show that draws in the crowds.

Instead of going to Moco, I suggest you spend your money at one of the respectful and high-quality museums in Amsterdam that wouldn’t charge €25 for a ‘Banksy calendar’ consisting of poorly photographed Banksy artworks.

Unlike previous months there were less series on my September watchlist and more films again. Some were as good or much better than I expected (Yesterday, The Informer) and other were either very forgettable or just plain disappointing (Hustlers, Angel Has Fallen). I’ve indicated my recommendations with a *.

The new science fiction Ad Astra starring Brad Pitt was quite different from what I expected and I think a lot of the other people in the cinema felt the same. However, unlike most of them who were very disappointed by it, I was mostly intrigued. Although I found there were lots of holes and inconsistencies in the storyline, I felt myself thinking about the film for a few days afterwards still. I expected a slick sci-fi filled with action and your usual galaxy adventures, but Ad Astra was the total opposite. The colours were muted, and it’s slow-paced with lots of voice-overs. It actually reminded me of the beautiful arthouse film The Tree of Life, coincidentally also starring Brad Pitt.

We also went to see Francis Ford Coppola’s classic Apocalypse Now about the Vietnam war in the cinema for a special 40-year anniversary screening. Hubby loved it but I was glad when those 2.5 hours were finally over. Being a war film, the sound of constant gun fire and explosives was obviously overwhelming which didn’t only hurt my ears, but it also made it impossible for me to follow any of the dialogue. Usually I’m totally fine watching films without subtitles, but sometimes it’s quite a challenge.

In September I wrote the following blog posts

You might’ve noticed from the screenshots above that the look of my website has changed a bit over the last weeks. Indeed, feeling inspired by BorderLess Live I decided to give my website a total makeover. It was 2.5 years ago I had changed it so I think it was about time. I case you forgot my previous looks, here’s a reminder (the screenshot on the left is obviously the old design): 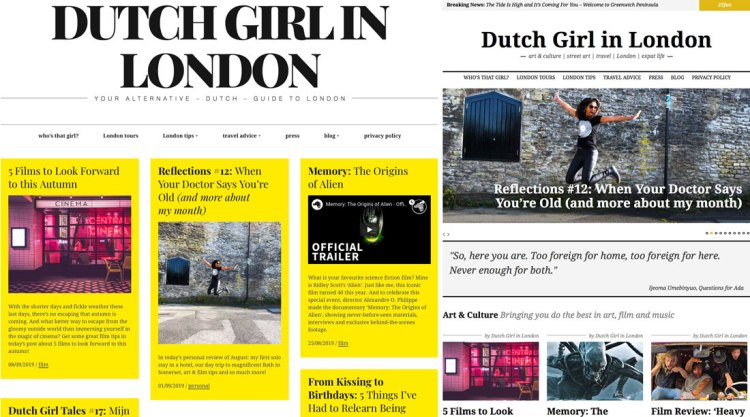 That’s it for my personal Reflections on the last month.
Tell me, what have you been up to in September?
Best, Zarina xx

5 thoughts on “Reflections #13: If You Don’t Hear From Me Again After this Message, Call for Help”