East London has so much to offer: from hipster cafes, to markets, vintage shops and a vast array of independent boutiques. But to me, it’s the amazing street art that gives this part of London its character and, quite literally, adds a bit of colour to the area.

While some walls are covered in dozens of small paintings and stickers, you will also easily find many impressive, jaw-dropping murals in the streets of Shoreditch, Hoxton and Hackney.

Famous mural by Phlegm on The Foundry bar in Shoreditch 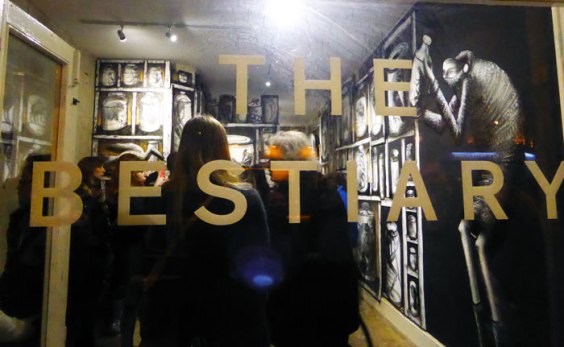 Earlier in the day I had met so many connoisseurs and street artists live in action and all off them had been saying they were heading to the opening that night. It would be a lame joke to say that Phlegm was all over the streets that day… (You can read my previous post and see live action street art photos by clicking on this link: street artists unveiled #2).

Having arrived at the Howard Griffin Gallery on Shoreditch High Street just after opening time, fellow blogger and new friend Inspiring City and I still had to queue for about half an hour. I was pleased to see so many more street art aficionados eager to see the show, but wish they had chosen another cold February evening to stand in the queue right in front of us. However, the exhibition was certainly worth the wait as it was very impressive and much bigger than I had expected. The crème de la crème of the London street art scene seemed to be at the opening. I even met the renowned artist Stik who looked like a proper rock and roll star! Curiously, the true star of the evening, Phlegm, wasn’t at the opening, or at least that’s what I’ve been told. Furthermore, none of the works on display were for sale which is quite unusual for a gallery. 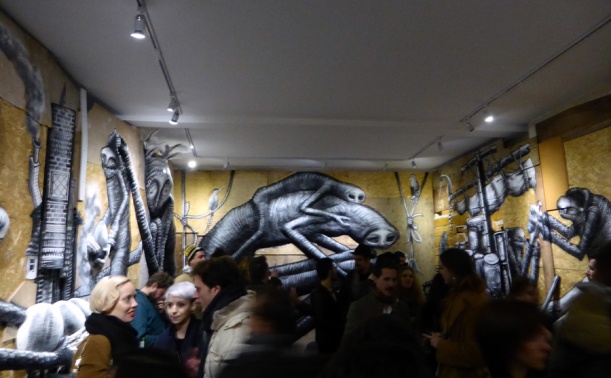 People have been compiling bestiaries since ancient times, but they were especially popular during the Middle Ages. Bestiaries in medieval times were manuscripts consisting of descriptions and illustrations of animals, a combination of imagined creatures and real animals. Often the descriptions were religious metaphors and therefore had a moralising tone. I am not sure what symbolic message Phlegm’s collection of wonderful creatures would be as they included an alien specimen, tributes to fellow street artists and a human-like figure being devoured by some type of crocodile. However, I am sure that Phlegm’s collection of remarkable creations would most definitely fit the medieval definition of a bestiary. 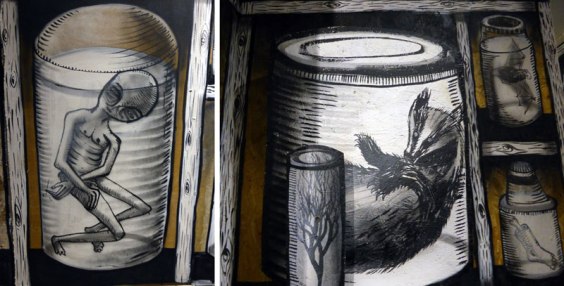 Jarred specimens: an alien and a badger. 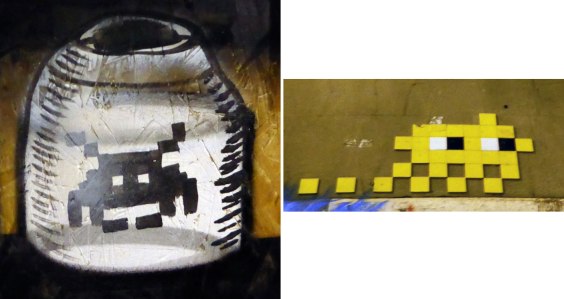 Left: Phlegm tribute to French street artist Invader in The Bestiary and on the right a piece by Invader in Shoreditch. 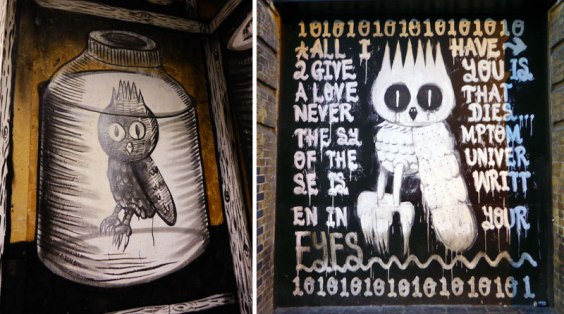 Left: Phlegm tribute to street artist Dscreet in The Bestiary and on the right a piece by Dscreet in Hoxton.

For his exhibition, Phlegm used the entire space to create his own bestiary. The artist definitely succeeded in transforming the gallery space into a captivating magical world with creatures made from paint, wood, clay and plaster. I was truly impressed by the show. Everywhere I looked, there was some curious scene depicted on the walls, both in 2D and 3D. There is there just too much detail in each and every creature to take in fully during one visit. 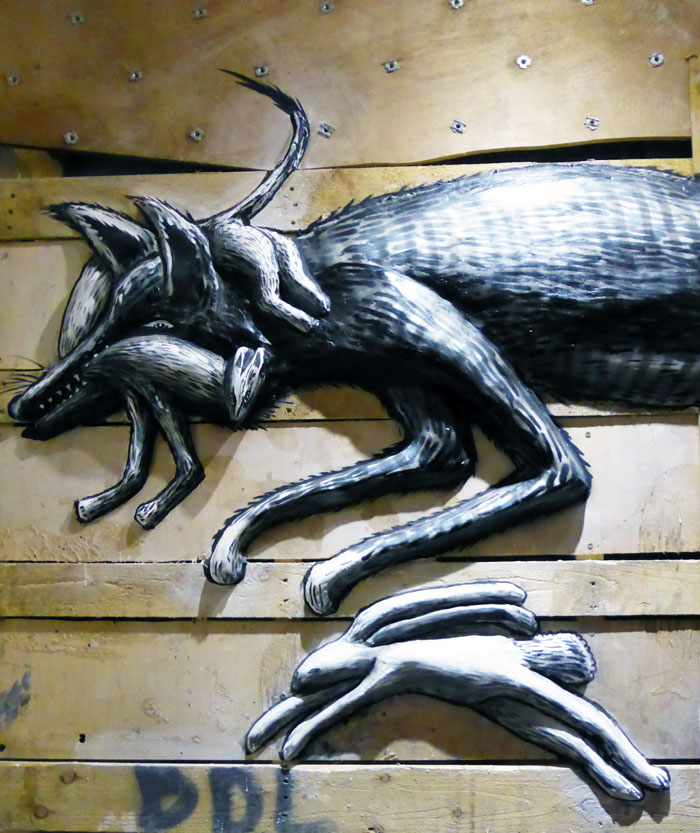 A wolf catching a rabbit. 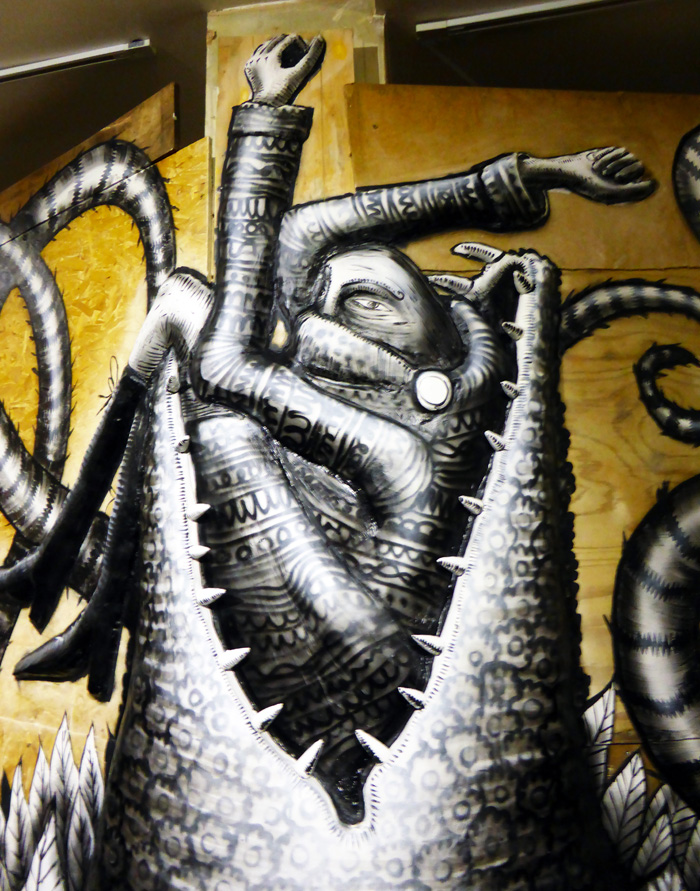 Human-like figure being devoured by a crocodile type of creature.

The tall creatures that seem to recur in all of his works (and in my eyes seem to be a combination of human-like giant figures and sloths) are both adorable and mysterious. 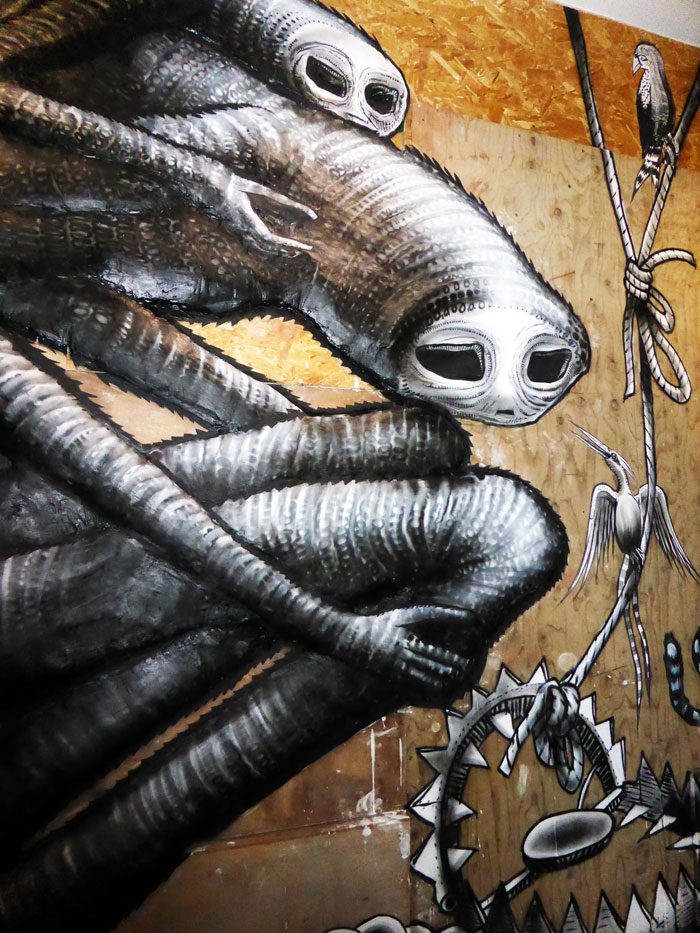 As a coincidence I’ve been seeing previews of the new Russell Crowe film, Noah, in the cinema recently and can’t help to draw similarities between Noah collecting animal species in order to save them from extinction and Phlegm’s curious animal collection. 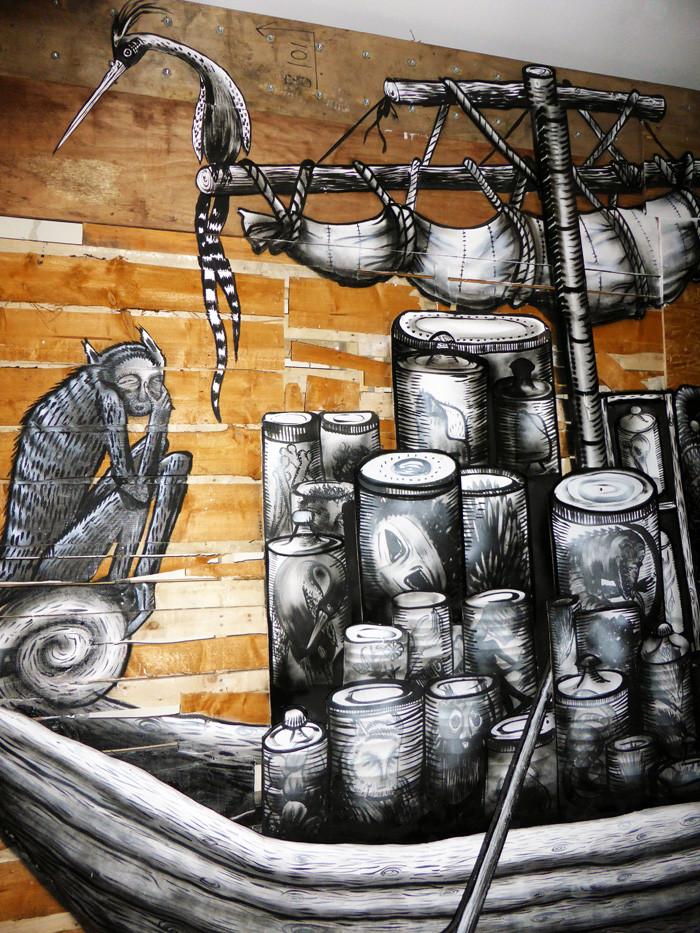 Noah and his ship with animal specimens? 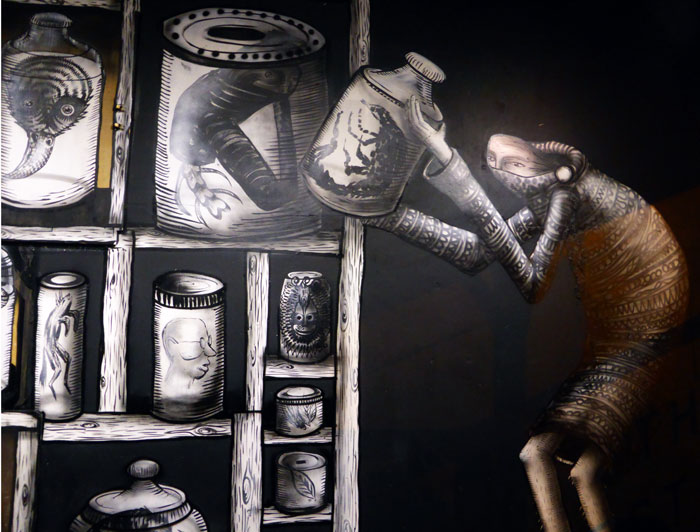 The collector puts the specimen jars on the shelves.

As you can see in the photos, all of the works are in black & white. The only colour I saw in the gallery came from a little fireplace underneath a nest of giant eggs. 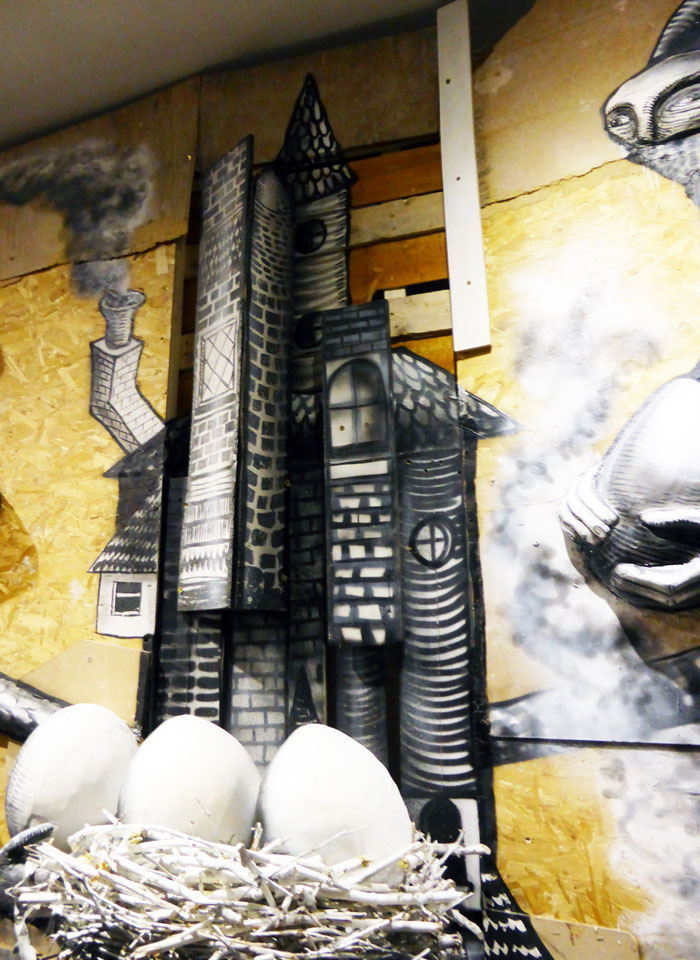 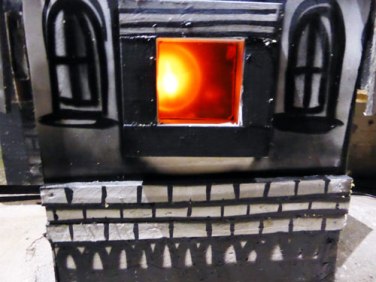 Gentle fireplace underneath the eggs, the only bit of colour in the exhibition. 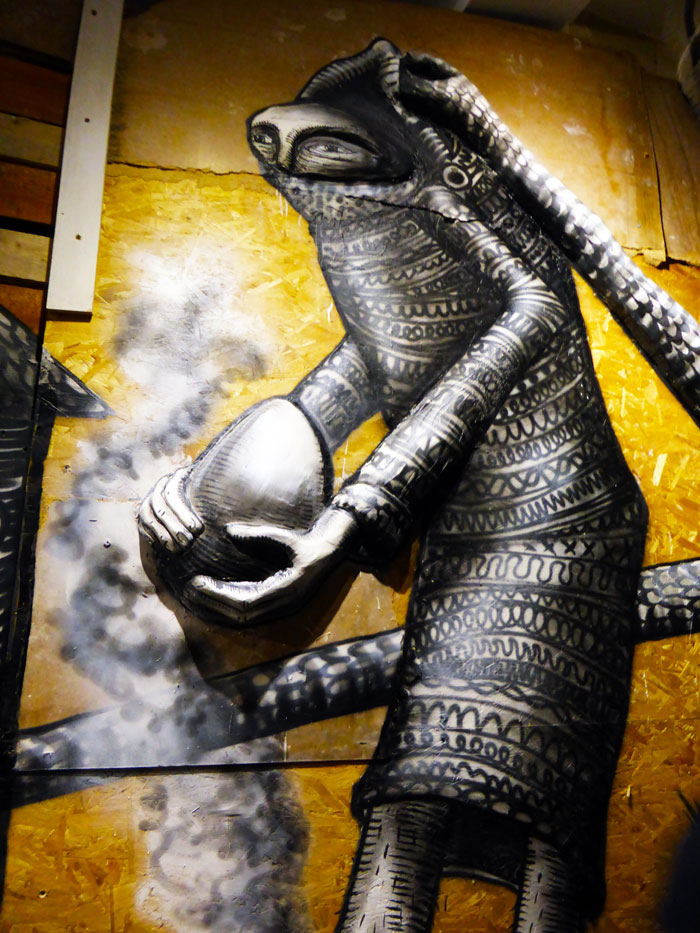 Creature putting a giant egg in the nest.

The black & white style is the signature style of this Sheffield-based artist. He started his career as an illustrator of self-published comics, using ink and paper. In the last years however, he’s been becoming quite a street art superstar as his marvelous creations are taking over more and more walls all over the world. You might recognise this extraordinary piece on the Queen Elizabeth Hall & Purcell Room at the Southbank Centre. Phlegm was one of the commissioned artists to create a work there in the summer of 2013. 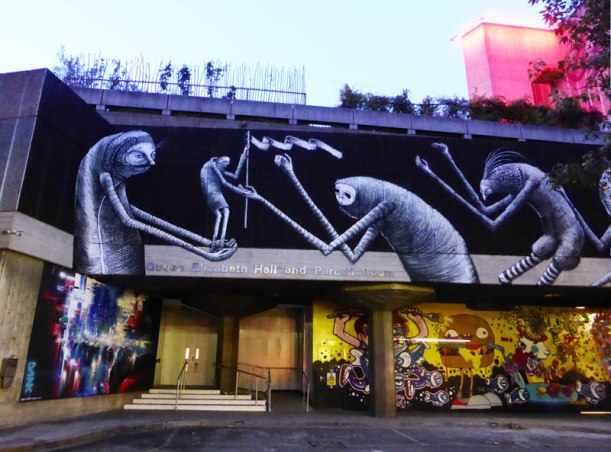 Commissioned works at the Southbank Centre. Top: work by Phlegm, bottom: The Lost Souls crew, and on the left: Dan Kitchener (DANK).

These photos don’t really do justice to the magnificent show, so I suggest you to have a look for yourself! For me this was the first street art exhibition I visited, but definitely not the last one.

7 thoughts on “A Modern Bestiary by Street Artist Phlegm” 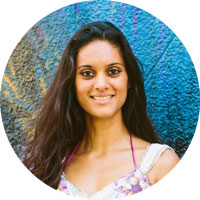