Plot
Meet Viago, Deacon, Vladislav and Petyr, four flatmates in Wellington, New Zealand. The mockumentary What We Do in the Shadows shows their daily mundane struggles such as paying rent, keeping up with the chore wheel, getting into vampire-friendly nightclubs and not to drink the blood of their flatmates’ human friends.

Synopsis
The opening credits reveal the setting for the film: “In 2013 camera crews gained access to a highly secretive society. They were granted protection by the subjects of the film. This is what they witnessed.” The camera crews follow the flatmates in a The Blair Witch Project meets The Office meets This is Spinal Tap style towards THE annual event for the undead, the Unholy Masquerade Ball.

“The Spinal Tap of vampire movies”

Dandy Viago (Taika Waititi), 397 years old, introduces the viewers to his flatmates while he awakens them and draws them out of their cupboard, bedroom and basement crypt. Deacon (Jonathan Brugh), 183 years old, is the youngest and bad boy of the group while 862-year old playboy Vladislav (Jemaine Clement) is the sexiest one. Hiding away in the basement is the ancient 8000-year old vampire Petyr (Ben Fransham) who doesn’t talk much or interact with the other flatmates, but is responsible for turning some of them into vampires.

Meet playboy Vladislav (this scene reminded me of the one with Keanu Reeves and the three brides of Dracula in Bram Stoker’s Dracula). 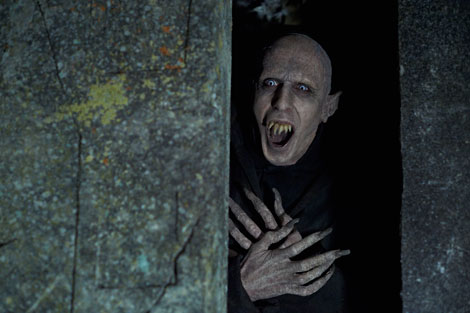 Petyr is not too keen to come out of his crypt.

The exclusive footage offers an insightful look in vampire society. We learn that life for fanged beings isn’t that glamorous or dead easy at all. Far from it: eternal life is more often a bloody mess, quite literally as Viago illustrates when he misses the main artery again while feasting on a human being.

Viago after one of his dinner incidents.

Although told in a light tone, I have learned more about vampires than any other previous vampire films and empathise with them more now. For instance I now understand why they are often dressed in black, wear long cloaks and have long hair: as they don’t have a reflection they can’t check their outfit in the mirror! Before this documentary I had never thought of this banal yet crucial daily activity. In their centuries of experience, the flatmates have found a clever solution for this: they draw portraits of each other and give fashion advice using these drawings.

It’s not all fun and game for the vampires as they frequently bump into their ancient enemies: werewolves! Fans of HBO series Flight of the Conchords will recognise Rhys Darby as the leader of the wolf pack, Anton. While Anton can’t stand the sight of vampires, he doesn’t approve the use of foul language towards them from his canine companions. Anton’s quote “We’re werewolves, not swearwolves” is one of the most memorable ones in the film.

With the arrival of a new inexperienced vampire the flatmates’ century-old friendship is tested. This turn of events offers insight in the complex psychology of vampires. The entire situation escalates when the vampire flatmates attend the Unholy Masquerade Ball.

If you’re a Flight of the Conchords fan as I am, you’ll be a sucker for this film featuring two of its main stars, Rhys Darby and Jemaine Clement. It has the same dry humour as the TV series: the vampire flatmates consider themselves to be übercool, but in fact they are clumsy and fail to see that their ‘vintage’ outfits and habits don’t fit in contemporary society. The film is well-paced and the many gags and memorable quotes will make you constantly laugh out loud. This film is indeed one of my favourite films of 2014. Since the BBC series The Office we have seen many mockumentaries that tried to equal its success, but failed miserably. This is not the case for What We Do in the Shadows: an absolute must-see vampire film which is even suitable for delicate viewers who don’t like horror films. And hipsters might even pick up some fashion tips!

7 thoughts on “Film Review: What We Do in the Shadows”