One of the must see exhibitions right now is the Ai Weiwei retrospective at the Royal Academy of Arts in London (till 13 December). This exhibition shows a great selection of installations, videos, photographs, furniture and even wallpaper by this great Chinese contemporary artist and political activist. The show is definitely thought-provoking and will give you some insight into the notions of freedom of speech, government cover-ups, corruption and censorship, often paired with a subtle hint of cheekiness.

Despite having been illegally detained in solitary confinement, received severe beatings by the authorities, had his studio-house demolished and his passport taken away from him for years, Ai Weiwei stands strong and continues creating artworks that scrutinise Chinese traditions and history.

Tree in the courtyard of the Royal Academy

When you walk up to the entrance of the Royal Academy you will be welcomed by this eight-part work Tree. For this installation Ai Weiwei sourced parts of dead trees originating from the mountains of southern China. Skilled carpenters then spent months reassembling all the different bits into complete trees again in Weiwei’s Beijing studio, using traditional hidden mortise-and-tenon joints. Industrial nuts and bolts were added to reinforce the structure. The trees are far more than just a beautifully crafted installation, as stated in the exhibition catalogue ‘these artificial constructions have been interpreted as a commentary on the Chinese nation, in which geographically and culturally diverse peoples have been brought together to form ‘One China’ in a state-sponsored policy aimed at protecting and promoting China’s sovereignty and territorial integrity.’ With this, the tone for the exhibition is set! 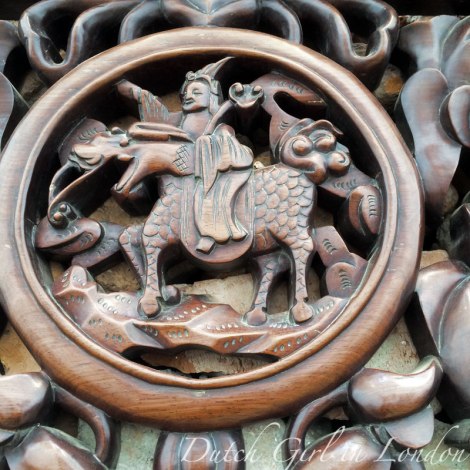 Detail of Souvenir from Shanghai (2012), one of the remnants of Ai Weiwei’s studio-house that had been demolished by the authorities due to ‘lack of required planning permission’. Weiwei managed to salvage some wood and concrete rubble despite being denied access to the demolition site.

We Are the Bike

This photo of the Bicycle Chandelier is my favourite one. Ai Weiwei has been making sculptures and installations with bikes for over a decade now. When he was growing up, the Forever bikes were mass-produced in China and used for the mass transportation of the urban workers. His bike sculptures are playful references towards mass-production and copying in China, but also reflects the relationship between the collective and the individual as all bikes connect as one.

(Rule number 1 in writing a good blog post is using clear titles and headers. I am clearly not following this rule by using a reference to Seven of Nine’s famous phrase ‘We Are the Borg’ in the Star Trek: Voyager TV series… Hope I haven’t lost any readers with this now!)

Behold this unique Coca Cola vase from the Han Dynasty (206 BC-220 AD)! Proof for aliens landing on Earth centuries ago and introducing this notorious softdrink to us simple earthlings?
Ceramics in this era were as commonplace as Coca-Cola bottles are today. Is this artwork about this parallel? Or does it reflect the westernisation of Chinese culture? I think I’ll stick to my alien theory. 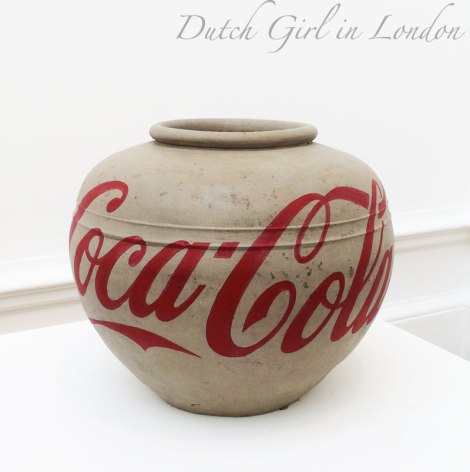 Below you see more painted vases from the Han Dynasty, but also prehistorical vases. In the background are photos of Ai Weiwei dropping ancient vases, a reference to ‘the wilful destruction of China’s historic buildings and antique objects’. 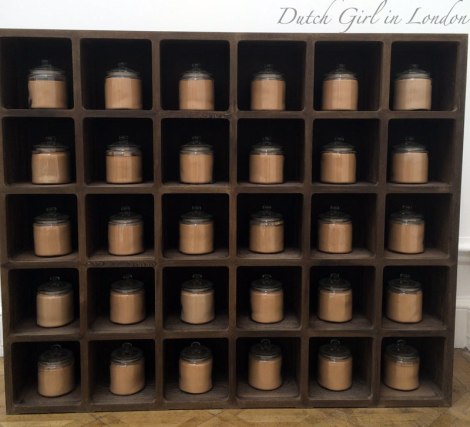 Before Weiwei started to ‘pimp’ and destroy ancient ceramics, he made his Furniture series using wood from the Qing Dynasty (1644-1911), some of it recovered from temples. My favourite is the acrobatic stool act, Grapes, made from 27 stools. 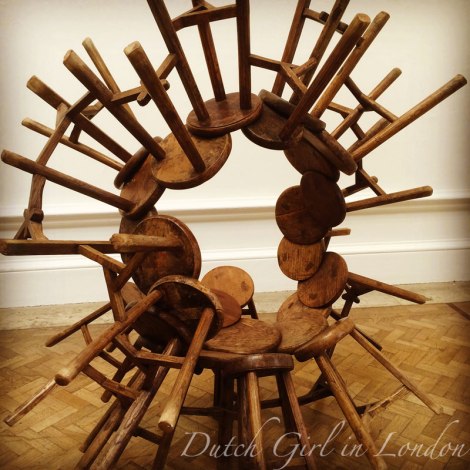 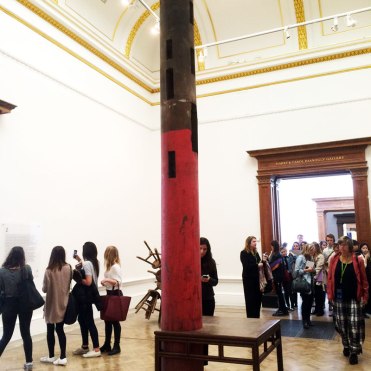 Sadly coinciding with my 29th birthday on 12 May 2008, 25 schools in the Sichuan province in south-west China collapsed after a destructive earthquake, killing over 5000 children. The event inspired Ai Weiwei to create a number of artworks and in the exhibition you can see film, photographs and installations that show the impact of the earthquake on the victims’ families.

Especially the work below, Straight, is very beautiful and powerful. It’s made from the steel reinforced bars used in the collapsed concrete school buildings. The work is both a memorial for the dead, but also criticism of the poorly built government buildings. These steel rods were severely bent and twisted in the earthquake. They were manually straightened again in Weiwei’s studio where he had 150 tonnes of scrap metal from the rubble transported to. 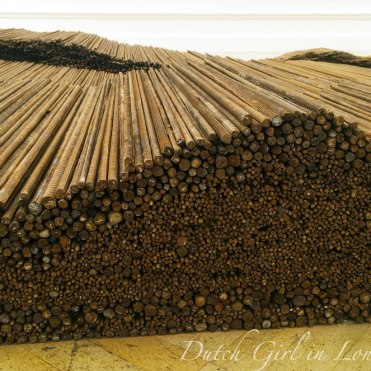 On the walls around Straight is a long list of the victims’ names, gender, date of birth and age, information that the authorities didn’t provide. Ai Weiwei established a citizens’ investigation into this, despite police harassment. Above is a photo of the end of the very long list. The youngest victim of this section was only 2 years old 😦

Ton of tea anyone?

These boxes are made up of different materials (compressed tea leaves, wood and crystal), but are all one cubic metre in size. These works combine Weiwei’s interest in form and volume with his interest in traditional Chinese craftsmanship, and minimalism. 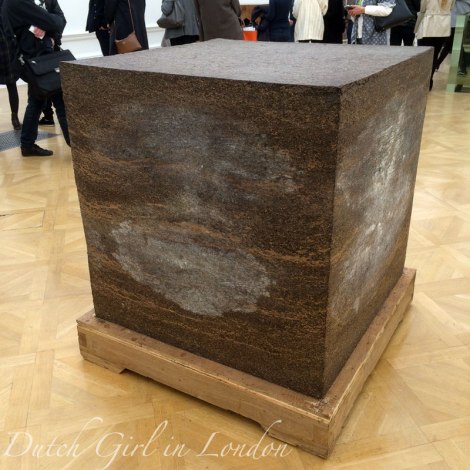 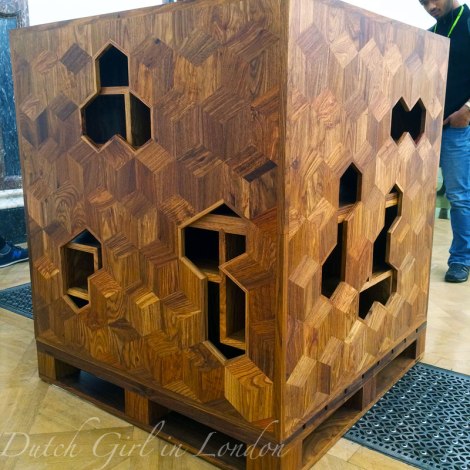 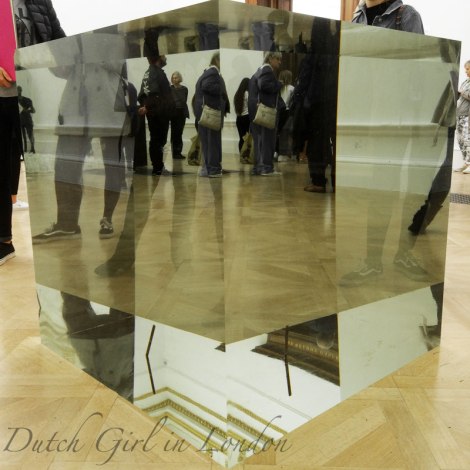 In April 2011 Ai Weiwei was arrested and illegally detained at a secret location for 81 days. After his release he wasn’t allowed to discuss his imprisonment with anyone and was put on parole for 12 months whilst the authorities had taken away his passport (which they returned only recently). S.A.C.R.E.D. (2012) is Ai Weiwei’s detailed recreation of his cell. In the six dioramas (Supper, Accusers, Cleansing, Ritual, Entropy, Doubt) you can see how oppressive this time was. As if it wasn’t enough to be held in a small room with all furniture still wrapped in plastic, he also had two guards very clearly present at all times, even when he was sleeping or going to the toilet!

Overview of diorama boxes S.A.C.R.E.D. You can view the inside scene from either the side or top.

Click on the photo’s below for a larger view. 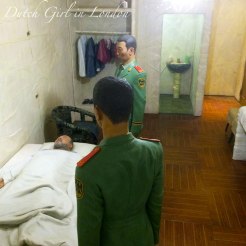 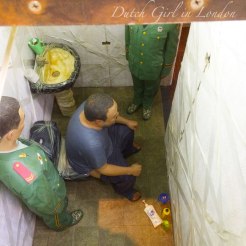 In need of some arty decorating tips?I suggest you go for one of these wallpaper designs by Ai Weiwei! On the left you see Golden Age, wallpaper that depicts the Twitter logo, handcuffs and surveillance cameras, inspired by Weiwei’s interest in social media but also his detainment and the twenty surveillance cameras installed at his home by the authorities.

The wallpaper on the right is a reference to two of Ai Weiwei’s works, including the photographic series Study of Perspective (1995-) of the artist with a raised middle finger in locations such as at the White House.

Ai Weiwei used precious marble to create these well-crafted objects. Once again we see a surveillance camera and handcuffs (made from jade). The gas mask symbolises the respiratory problems of thousands of children or die as a result of the highly polluted Beijing air.

Grass in Chinese poetry, called cao, refers to the common people, in popular culture it’s used as a swear word online. The baby stroller is a replica of the one used for Weiwei’s son. The artist discovered detailed photo footage of his life, including images of the stroller, by the authorities. 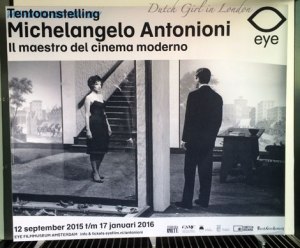 2 thoughts on “Exhibition: Ai Weiwei at the Royal Academy of Arts”