Looking for something fun to do in London during the Christmas school holidays, but want to avoid the big crowds? Then head over to the hidden gem that’s the Fan Museum in Greenwich for a dose of art, that both young and old will enjoy. For their temporary exhibition Street Fans, renowned street artists joined forces with Paris-based master fan maker Sylvain Le Guen to give the ancient art of fan making a contemporary twist, resulting in colourful and unique art objects. 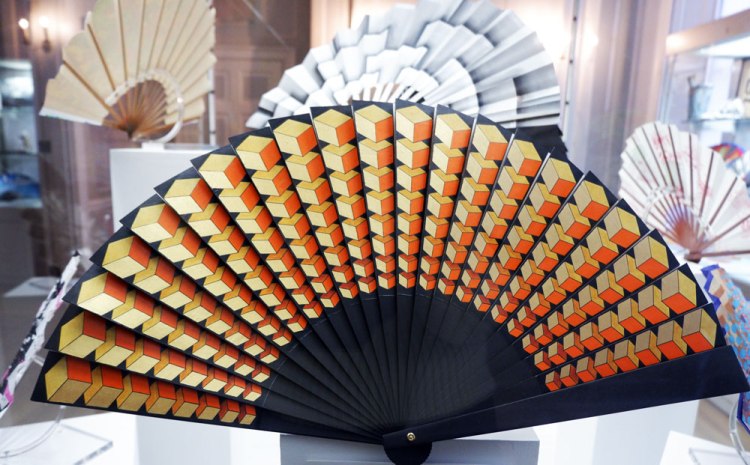 The idea of creating ‘street fans’ came from French street artist Codex Urbanus who set up a similar project in collaboration with a museum in Paris. After the Heritage Craft Association announced that fan making is actually a dying craft in the UK, the Fan Museum realised that the street art project came at a perfect moment. In the end 29 street artists from the UK and abroad took part in the exhibition, creating artworks for the ‘fan leaves’, as the paper is called, and sometimes even painted directly on wood. Fan maker Sylvain Le Guen subsequently transformed all these artworks into unique fans using different materials and techniques to match the design and artist voice. See the ‘bone’ sticks used for the fan below for example, that Sylvain used to match the dancing skeletons.

The Dance of the Vampires by Jean Faucheur / Sylvain Le Guen

I’m not sure about you, but before my museum visit, my first associations with fans would be elegantly decorated Chinese fans or the bright colourful fans used in flamenco. I’ve been taught some choreographies in my flamenco classes using fans. They both function as a ‘prop’ and an extension of the body, but also the sound they make when you flick them open or slap them against the body plays an important part in the dance. It was therefore very interesting for me to learn more about the history of fans in the museum. The oldest known (fixed) fans were found in Tutankhamen’s tomb, dating back to around 1320 BC. Depicting scenes from the pharaoh’s life, these historical objects have given historians more insight in ancient Egyptian society.

In the 9th century the Japanese invented the folding fans, and this technique was further improved by the Chinese. Eventually, these exotic objects made their way to Europe. First of all popular among royalty – the social media influencers of the day – fans became important fashion items that denoted status. But they were actually more than accessories, they were also respected art objects and renowned artists such as Gaugain and Dalí are known to have painted fan leaves. The 18th century was the golden age of fan making in Europe and especially France, the UK and the Netherlands excelled – I didn’t know about the Dutch fan making history, but apparently there’s even a Rembrandt painting of a girl holding a fan which proves their popularity. I’ve been told in the museum that there was once a thriving fan making industry in London. It’s a shame that a few hundreds years later this craft is now dying. As historical objects the fans can actually learn us so much. I was intrigued by the story the museum director, Hélène Alexander, shared with me about an upcoming exhibition based on 18th-century fans she is putting together from their collection of 5,000 (!) fans (most of them are in storage). The 18th century saw the rise of printed fans, which often contained political messages – it was the age of revolutions of course – but also proved the growing literacy among women.

It was thrilling to see a show that breathed life into objects often considered as archaic. And introducing street art into the designs was a bold and invigorating concept. I’m a fan myself now 🙂 While I was very familiar with the works of most of the artists in the exhibition, it was surprising to see some adopted a different style due to the nature of the fans. If you’re into street art, you won’t want to miss this show!

Street Fans is on at the Fan Museum in Greenwich, London, until 31 December.
Curated by Jacob Moss and Imogen Clarke.

The Pull of Gravity by Philippe Hérard / Sylvain Le Guen