London is a great city trip destination: it’s a true shopping paradise, houses world-renowned museums and offers great dining options. However, sometimes the busy metropolis can also get a bit overwhelming. There are numerous beautiful parks dotted around the city where you can briefly exchange the urban jungle for a green retreat, but why not combine a free and unique public contemporary art trail with explorations of a far less touristy side of London? The Line art trail in Greenwich runs between the Queen Elizabeth Olympic Park and O2 Arena, and is suitable for families, art lovers, ramblers and even thrillseekers!

Following waterways and the Meridian Line

The Line broadly follows the historic Prime Meridian Line, the Longitude 0º. ‘Every place on Earth was measured in terms of its distance east or west from this line.’ (Source) The entire walk takes about 3 hours to complete, but there are various Tube stations along the route so you could decide to do just part of it. I did the majority of the walk last summer and there were about a dozen of contemporary artworks on display in the landscape at the time. My absolute favourite piece was A Bullet from a Shooting Star by Alex Channeck, which you can see in the photo at the top of this post. Located just a short walk from the O2 Arena, this precariously balanced electricity pylon looks like a lightning bolt that’s been shot down to Earth by Zeus himself.

If you decide to visit only part of The Line, then I’d recommend to do a loop around the O2 Arena and see the artworks (and extensive amount of building work) in that area. Get off at North Greenwich station and walk along the waterfront to see all local works. Bear in mind that Alex Channeck’s work is in the other direction – check The Line map for all artworks and their locations. Here are the other four artworks around the O2 Arena (as of the summer of 2017).

Quantum Cloud by Antony Gormley with the Emirates Air Line behind it. 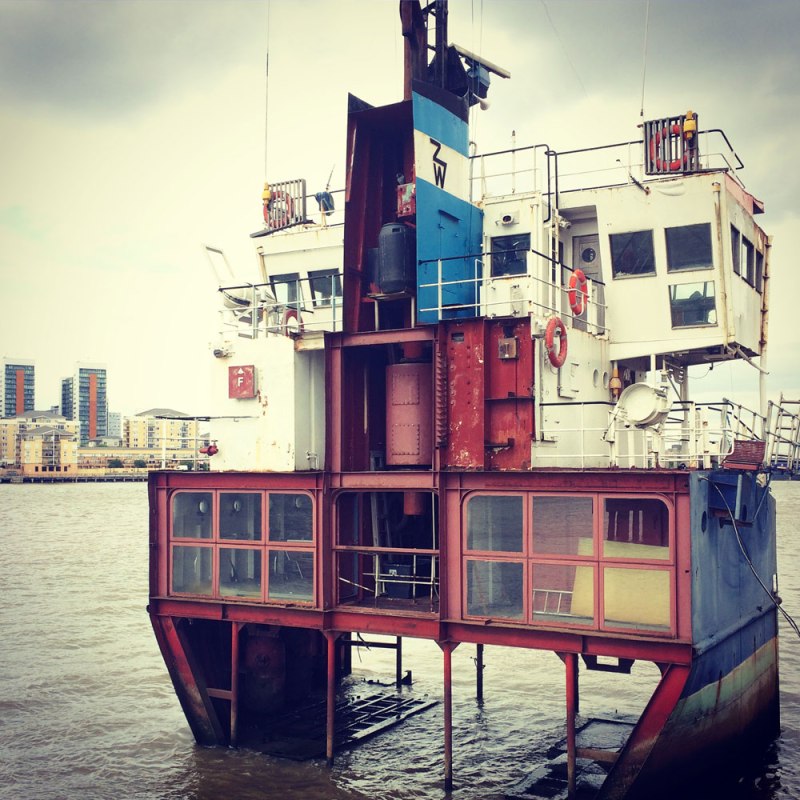 A Slice of Reality by Richard Wilson showing a 1/8th slice of an ocean sand-dredger.

Liberty Grip by Gary Hume. This sculpture consists of three separate sections, each modelled after mannequin arms (although it looks like another body part, or is it just me?!?)

Here by Thomson & Craighshead, marks the distance around the world. The artwork was originally conceived for a different project, but it seems so appropriate to be located near the Meridian Line now.

If a nice stroll along the riverfront and admiring modern art isn’t enough for you, then you might be interested in some of these more heart-racing activities:

Or just enjoy the peaceful surroundings from the ground or water…

It’s also possible to take the Thames Clipper between North Greenwich pier and the London Eye. Admire some of London’s most famous skylines from the water and avoid the busy streets of the city. For more information, click here.

For more information about the artworks and the entire route, have a look at the website of The Line.

Have you walked The Line or got your heart pumping in one of the adrenaline-fuelled activities mentioned in this blog? Tell me about your experiences in a comment below!
Zarina xx